November 07, 2019
By The Law Offices of Joel DeFabio
Committing a federal crime is a serious offense and should not be taken lightly since the consequences are usually severe.

For over a decade, drugs, immigration, fraud, and firearm cases have made up the tremendous majority of federal felonies and Class A misdemeanors. In 2016, these crimes made up 81.6% of all cases reported to The United States Sentencing Commission. 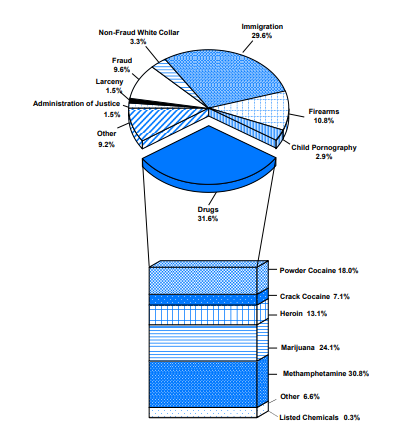 During the year 2016, The United States Sentencing Commission (referred to as the Commission from here on out) was notified of 67,874 federal criminal cases in which the offender was sentenced that year. There is a disproportionate amount of case types in each category. Read on to learn about federal crimes during 2016.

As you can see from the graph, () federal drug crimes outweigh all other federal crimes at 31.6% of all cases. In 2016, there were 21,387 drug cases reported to the Commission. Of those cases, 89.9% of them were related to drug trafficking.

Firearms offenses made up 10.8% of all federal crimes committed in 2016. There was a total of 7,305 firearm cases reported to the Commission that year. It is interesting to note that this number is about the same as it was eight years prior, in 2008. From 2015 to 2016, there was a 3.3% increase in federal crimes involving firearms.

As observed from the graph, in 2016, the vast majority of federal offenders were Hispanic and accounted for 53.3% of all offenders. However, the racial makeup of offenders differed extensively according to the type of crime committed. A total of 81% of Hispanic offenders were charged with one of two types of crimes—either immigration or drug trafficking. Racial and ethnic backgrounds differed significantly upon the type of drug concerned in the offense.

At 58.3%, most federal offenders in 2016 were U.S. citizens. Most of the non-citizen offenses were attributed to immigration violations. After immigration, the next most frequent offense amid non-citizens was drug trafficking at 19.8%.

As you can see from the figures, not all federal crimes are created equal, and not all offenders are the same. People commit federal offenses for all sorts of reasons. It is interesting to note the similarities and differences between the types of offenses and those who are statistically more likely to commit each type of offense.

If you have been accused of a federal crime, don’t wait to contact an attorney. Federal crimes are very serious and should be handled with care by a trained professional. With over 35 years of experience, The Law Offices of Joel DeFabio in Miami, Florida are your go-to federal crimes law firm.

Call The Law Offices of Joel DeFabio today at (305) 851-5581 to speak with an attorney about your potential case.